For Greater New York Dental Meeting attendees, there are presidential sites to visit!

NEW YORK, N.Y., USA: The 2018 Greater New York Dental Meeting is being held from Nov. 23 to 28 at the Jacob K. Javits Convention Center, and attracts thousands of attendees from across the country and around the world. If you are coming to the meeting from out of town, you might want to consider things to do about town — after you’ve completed your courses and visited the exhibit hall, of course.

The current president of the United States hails from New York City. But perhaps you’re more interested in learning about some of the country’s earlier leaders? If so you are in luck, because there are a number of historic monuments in Manhattan.

If you are a Greater New York Dental Meeting attendee who might like to do a bit of presidential sightseeing while you are in town, there are plenty of opportunities. Check out the possibilities listed below. 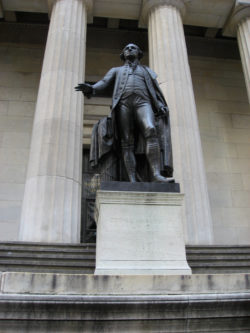 This statue on the steps of Federal Hall marks the site at which George Washington took the oath of office as our nation’s first president. (Photo: Fred Michmershuizen / Dental Tribune)

New York City was the nation’s first capital, and Federal Hall was home to the first Congress, Supreme Court and Executive Branch offices of the U.S. government. It later became a customs house and a sub-treasury building. Today, it is a museum.

This is where George Washington took the oath of office as the nation’s first president.

To visit: This historic site is located at 25 Wall St., across from the New York Stock Exchange. By subway, take the 2, 3, 4 or 5 train to the Wall Street station stop. It is open free to the public weekdays from 9 a.m. to 5 p.m. It is closed Saturdays and Sundays. Guided tours, also free, are offered daily at 10 a.m. and at 1, 2 and 3 p.m. More information is available online, at www.nps.gov/feha/index.htm.

Nearby: While you are in the area, you might also want to visit the African Burial Ground National Memorial, located at 290 Broadway, a sacred place where both free and enslaved people of African descent were laid to rest. Also close by is the National Museum of the American Indian, which is housed in the Alexander Hamilton U.S. Custom House at 1 Bowling Green. 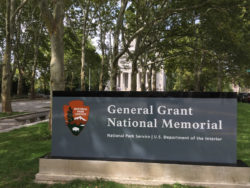 Grant’s Tomb is where the 18th president of the United States and his wife are laid to rest. The historic site features bronze busts of Grant’s senior generals, battlefield maps, flags and other historical artifacts. (Photo: Fred Michmershuizen / Dental Tribune)

Formally known as the General Grant National Memorial, this is where President Ulysses S. Grant and his wife, Julia, are laid to rest. This is the largest mausoleum in North America. Before becoming the 18th president of the nation, Grant was commanding general of the Union Army during the Civil War, and Grant’s Tomb, as it is popularly known, features bronze busts of Grant’s senior generals, battlefield maps, flags and other historical artifacts.

To visit: Go to Riverside Drive and West 122nd Street. By Subway, take the 1 train to the 116th Street-Columbia University stop and walk six blocks north and two blocks west. It’s free of charge and open every other hour each day except Mondays and Tuesdays. Check online, at www.nps.gov/gegr/index.htm, for exact times and more information.

Nearby: Riverside Church, the tallest cathedral in the United States, is directly across the street from Grant’s Tomb. And just three more subway stops north on the 1 train is Hamilton Grange National Memorial, home to founding father Alexander Hamilton, located in Saint Nicholas Park at 141st Street. 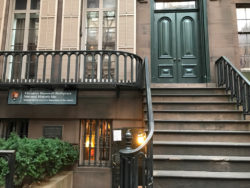 Theodore Roosevelt was born in this townhouse, located on East 20th Street between Broadway and Park Avenue South in the Gramercy Park neighborhood of Manhattan. (Photo: tripadvisor.com)

Located in the Gramercy Park neighborhood of Manhattan, the Theodore Roosevelt Birthplace National Historic Site is open to the public. This is the boyhood home of the 26th president of the country. There are galleries of historical memorabilia, and visitors can watch a film about Roosevelt’s childhood. The rooms are appointed as they were in the 1860s.

Free guided tours are offered by park rangers, who are friendly and knowledgeable.

To visit: The townhouse is located at 28 E. 20th St., and it is open free to the pubic from 9 a.m. to 5 p.m. every day except Mondays and Tuesdays. By subway, take the 6 or R train to the 23rd Street stop. Visit www.nps.gov/thrb/index.htm for more information.

Nearby: While you are in the neighborhood you might also want to stroll by Gramercy Park. Although fenced off and not accessible to the public, you can see a statue of Edwin Booth (brother of John Wilkes), who was a famous actor, and “Janey Waney,” a colorful mobile by the celebrated artist Alexander Calder. Also near the Roosevelt birthplace is Madison Square Park, home to statues of Chester A. Arthur, who was the 21st president, and William H. Seward, who was New York governor, United States senator and secretary of state under Lincoln.

Bonus: If you are hungry after all that walking around, Madison Square Park is also home to the very first Shake Shack!

CHICAGO, Ill., USA: The Chicago Dental Society’s 2018 Midwinter Meeting was held Feb 22 to 24, and whether you came for the deals and stayed for the pizza, or vice …

NEW YORK, N.Y., USA: Attending her second Greater New York Dental Meeting, Asmaa N Yagob of Brooklyn, N.Y., was in the standing-room-only area on the outer edges of the live …

Interview: ‘This is about humanity and our role as health care providers’

Dr. Anne Koch, who is presenting two lectures at AAE17, received her DMD and Certificate in Endodontics from the University of Pennsylvania. She is founder and past director of the …

Glidewell Laboratories is currently celebrating 50 years of continuous growth and evolution, and the recent Glidewell Dental Symposium in Orlando was the perfect setting to catch up with company founder and CEO Jim Glidewell, who has transformed a one-man dental shop into the most successful dental laboratory in the world.

CHICAGO, U.S,: The Chicago Dental Society held its 2019 Midwinter Meeting from Feb. 21 to 23 at McCormick Place West. The event featured more than 600 exhibiting companies and numerous C.E. opportunities. The theme of the meeting was “A Midwinter Mardi Gras.”