Home/Articles
News
‘The Next Generation’ of the Solea CO2 all-tissue dental laser system is physically smaller and cuts faster and smoother, according to Convergent Dental. (Photo: Convergent Dental)

“With this new platform, Solea has reached a level that I can see it becoming the standard of care,” Michael Cataldo, CEO of Convergent Dental, told Dental Tribune during a telephone interview on Oct. 1, when the new version of Solea was announced. “It’s easy. It’s really easy — and in most cases it is as fast or faster than the drill.”

Cataldo said that users of the Solea laser have reported that they are able to perform an average of four to six more procedures a day, when it feels like they are doing less.

“Solea means less work, with more revenue,” Cataldo said. “If you have been thinking about lasers, it’s time.”

“This new generation of Solea provides a quantum leap in performance at every level. Most importantly it enables dentists to do virtually 100 percent of cavity preps anesthesia-free,” Cataldo said in the press release. “In addition, Solea now cuts faster and smoother, so dentists get more done in less time with an even better patient experience.”

Solea earned its reputation for enabling dramatic practice growth and reduced stress for dentists and patients by taking anesthesia, bleeding, sutures and discomfort out of the dental experience, according to the Convergent Dental press release. Before the launch of this new platform, Solea dentists reported doing four to six more procedures per day while feeling like they were doing less work, Convergent Dental said. With this new generation, Solea dentists will benefit from even more growth while enjoying an even more relaxing work day. Better still, it all comes in a smaller package that is even easier to use, the company said.

According to Convergent Dental, statistics collected from nearly 1,000 procedures in early use of the new Solea platform included the following results:

Also according to the company, other features and benefits include the following:

According to Convergent Dental, 99.2 percent of 833 cavities and 132 soft-tissue procedures were treated successfully without local anesthesia in early use. 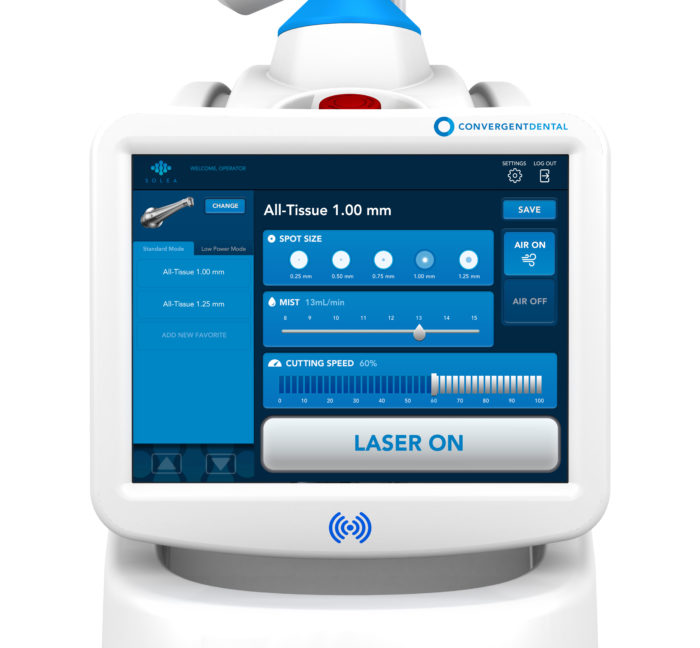 Convergent Dental says the ‘Next Generation’ of Solea is smaller, cuts faster and smoother — and more than 99 percent of cavity preps can now be done anesthesia-free. (Photo: Convergent Dental)

More information about Solea is available online, at www.convergentdental.com, or by calling (844) GOSOLEA. You can follow the company on Twitter at twitter.com/solea, on Facebook at www.facebook.com/ConvergentDental and on LinkedIn at www.linkedin.com/company/convergent-dental.

Not only does FDC continue to offer 30-plus hands-on courses for dental professional to sharpen their skills and learn new techniques, but it also offers...

share
save
advertisement
News Fri. 24 June 2022
Stress tip of the day: Get the full ‘Mouth, Mind and Body Connection’ at the 2022 Florida Dental Convention

More than 7,000 attendees are not only learning about new products from 300-plus leading dental vendors and receiving educational takeaways from 130-plus...

Get ready for three-plus days of celebrating excellence with industry-leading keynotes and speakers, educational sessions, product experiences and ...

The 96th Annual American Dental Hygienists’ Association Conference is being held from June 21 to 23 in Louisville, Ky. According to meeting organizers: ...

News Wed. 9 August 2017
A hygienist’s observations from the ADHA meeting in the ‘City of Bridges’

JACKSONVILLE, Fla., USA: Once upon a time, in the land of bridges and crowns, a purple-cloaked prophy queen reigned over her happy subjects. So beloved was ...

GBT and new concepts in cariology

An update on irrigation in Endodontics

Management of the Odontogenic Infection for the General Dentist