Home/Articles
News
Stanley M. Bergman, chairman of the board and CEO of Henry Schein Inc., was among the international stakeholders who addressed a United Nations side meeting on oral health on Sept. 28, 2018, in New York City. (Photo: Fred Michmershuizen/DTA)

NEW YORK, N.Y., USA: Some of the world’s leading policy experts gathered on Sept. 28, 2018, for a United Nations side meeting on oral health. The side meeting was conducted by the New York University College of Dentistry and its World Health Organization (WHO) Collaborating Center, together with the NYU College of Global Public Health.

The purpose of the meeting was to study policies to help prevent noncommunicable chronic diseases (NCDs), which have been identified as a growing threat. The daylong event was open to the public, free of charge. It was held at NYU’s Institute for the Study of Ancient World. The side event followed the United Nations 3rd High-Level Meeting on Noncommunicable Diseases (NCDs), held the day before at the U.N. Headquarters.

“Good oral health is a crucial element of overall health and, as such, part of the human right to health,” Svetlana Axelrod, WHO assistant director general for noncommunicable diseases and mental health at the WHO Headquarters in Geneva, who presented the keynote address, said in a press release issued by NYU before the meeting. “It is a striking fact that untreated tooth decay is among the most common noncommunicable diseases worldwide — and almost entirely preventable.”

Stanley M. Bergman, chairman of the board and CEO of Henry Schein Inc., and co-chair, healthcare governors, at the World Economic Forum, participated in a panel discussion titled “NCDs & Oral Health in all Policies — Who Does What?”

Before his remarks, Bergman spoke with Dental Tribune about his goal of helping find the appropriate formula for public-private partnerships to improve oral health on a global basis. He said that untreated oral disease is a significant drain on world economies.

“I want to help bring these issues to the attention of decision makers, whether in government, business, in the unions — people who care about health care,” Bergman said. “We want these decision makers to understand the impact of untreated oral disease, and we want to find ways in which we can work together in public-private partnerships.”

“Through Henry Schein Cares, we advance public-private partnerships,” Bergman said, citing the Give Kids a Smile program, initiatives with the American Dental Association and other efforts designed to increase access to care. “We have numerous programs where we provide products to dentists who are going to underserved parts of the world to help them provide care.”

“We are also involved in many advocacy programs, with the Santa Fe Group, through this program with NYU, a similar program at Harvard, and at about 10 other schools around the world that are all working on the issue of exposing the negative impact of untreated oral disease on society,” Bergman said. 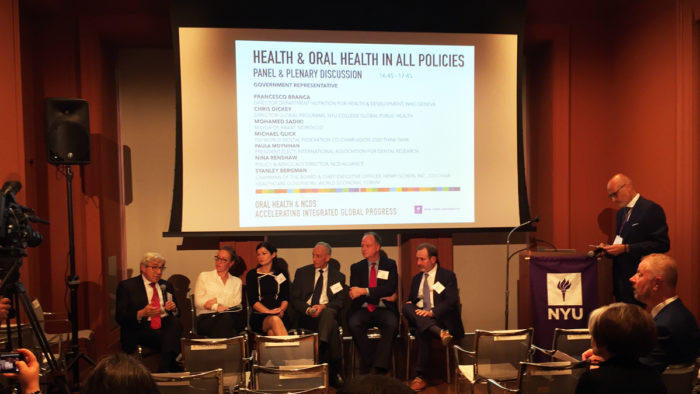 Stanley M. Bergman, far left, chairman of the board and CEO of Henry Schein Inc., participates in a panel discussion titled ‘NCDs & Oral Health in all Policies — Who Does What?’ on Sept. 28, 2018, in New York City, during a United Nations side meeting on oral health. (Photo: Fred Michmershuizen/DTA)

NYU’s side event was designed to bring increased visibility to oral health, provide a snapshot of the burden of oral diseases, and outline challenges related to addressing oral disease, particularly in low- and middle-income countries, the press release said.

“Cost-effective interventions to prevent oral diseases are available at the policy, health system, community and personal levels, but are not universally implemented,” said Richard Niederman, chair of the Department of Epidemiology & Health Promotion at the NYU College of Dentistry and director of the WHO Collaborating Center for Quality-improvement, Evidence-based Dentistry.

More than 3.5 billion people worldwide suffer from oral diseases and related psychological, social, and economic consequences, the press release from NYU said. Despite the wide prevalence of oral diseases, oral health is rarely the focus of discussions on non-communicable diseases, NYU said.

“While worldwide access to oral health care is improving, many people still lack access,” said Cheryl G. Healton, dean of NYU College of Global Public Health. “In some parts of the world, notably in sub-Saharan Africa, the ratio of dentist to patient population is exceedingly low —1:150,000, according to WHO — making universal access essentially impossible and prevention even more important.”

The event was endorsed by the governments of Burkina Faso and Morocco. Henry Schein Inc. and Colgate were corporate sponsors.

Exocad, an Align Technology company and a leading dental CAD/CAM software provider, has announced that Insights 2022, the third edition of the ...

share
save
advertisement
News Wed. 27 July 2022
Dental services in the US hit with inflated prices

CHICAGO, US: The US Bureau of Labor Statistics began tracking the consumer price index back in 1995. Now, over two decades ...

BOZEMAN, Mont., US: Montana State University (MSU) researchers have developed a 3D-printing device that is able to replicate microbial mosaics and ...

EDMONTON, Canada: A team of researchers at the University of Alberta has secured funding to develop a 3D ultrasound device that would allow dentists to ...

News Thu. 9 June 2022
SprintRay’s latest 3D resin drives down the cost of a crown to just US$2

LOS ANGELES, US: Accessibility is a primary driver in the latest collaboration between SprintRay and BEGO. The ceramic-filled hybrid material that is ...

Digitalisation in the world of dentistry and dental technology is advancing rapidly, and it is now difficult to imagine everyday clinical practice ...

News Fri. 8 April 2022
Dental 3D-printing market to reach almost US$8 billion over the next few years

NORTHBROOK, Ill., US: 3D printer manufacturers have a period of substantial market growth to look forward to in the coming years. A global forecast ...

Different is Better - A New Way to Administer Dental Anesthesia

From IOS to the perfect 3d printed model

Moving to the Cloud: A Dentist's Perspective