Home/Articles
At the entrance to the Colorado Convention Center, the 40-foot-tall blue bear, a sculpture formally titled ‘I See What You Mean’ by the late Denver-area artist Lawrence Argent, tries to get a closer look at AAE18. (Photo: Robert Selleck, DTA)

DENVER, Colo., USA: AAE18, the annual meeting of the American Association of Endodontists, was held April 25-28 at the Colorado Convention Center. The world’s largest education, exhibit and networking event for endodontists, AAE18 featured a broad range of speakers, a great variety of program formats and exciting special events.

The meeting offered more than 100 high-quality educational sessions in a variety of tracks, including the new “Controversies and Hot Topics” track, which addressed some of the most divisive topics in endodontics, including canal cleaning and disinfection, the introduction of nanoparticle-guided therapeutics, and surgical versus nonsurgical retreatment.

The “Surgical” track focused on updating clinicians on the possibilities of current technologies, techniques and research to demystify this procedure. Other tracks included “Endodontics Without Limits,” “Interdisciplinary,” “Essentials for Endodontic Practice” and “Submitted Presentations,” which covered a broad range of topics from access preparation to treatment outcomes to “What an Endodontist Can Learn From Captain Sully.”

Attendees also were able to visit with more than 100 vendors in the AAE18 exhibit hall, to explore the latest in endodontic equipment, materials and supplies, as well as practice management and other business resources to support endodontic practices.

Craig O’Neal prepares a GentleWave demonstration unit with assistance from dental assistant Chelsi Thomas in the Sonendo booth.
In the AAE Attendee Lounge, Daisuke Nagao, DDS, of Hitachinaka City, Japan, waits for the prize wheel to stop spinning (his prize: a pair of earbuds).
Marco Canonico in the Angelus booth, supplier of MTA Repair HP and MTA-Fillapex placement syringe.
In the Avalon Biomed booth, Hugo Munoz, DDS, of Guatemala City, Guatemala, learns more about NeoMTA Plus after having worked with a sample. Helping him, from left, is Nikki Ruck and Carolyn Primus, PhD.
Megan Booth and Brian Kelting with the endo-procedure wheel in the Coltene booth.
Collect up to four plinko chips at the Dentsply Sirona Endo booth and try your chances at a variety of prizes, including a Mavic Air Camera Drone.
Steve Kim (holding an EvoFill) and Katie Liu (with a Duo-Gun) in the DiaDent booth.
Register for the 11th annual World Endodontic Congress, which will be Oct. 4-7, 2018, in Seoul, Korea, and you get a free International Federation of Endodontic Associations T-shirt. From left are Ria Park and Jace Lee of the Seoul chapter of IFEA.
The counter at the Munce Discovery Burs booth is typically busy.
Sara Qu wields a giant rotary file in the PacDent booth.
Mike Walsh displays the Porter Silhouette low-profile nasal mask in the Porter Instrument booth.
Tanya Beck in the Roydant Dental Products booth with the MAP One intro kit.
A standing-room-only crowd listens to the GentleWave presentation by Randy Garland, DDS, of Encinitas, Calif., in the Sonendo booth.
The line stretches more than 100-people deep in the Zeiss booth for a book signing event with authors Syngcuk Kim, DDS, PhD, MD (Hon), and Samuel Kratchman, DMD, and associate editors Bekir Karabucak, DMD, Meets Kohl, DMD and Frank Setzer, DMD, PHD. The book is ‘Microsurgery in Endodontics.’ 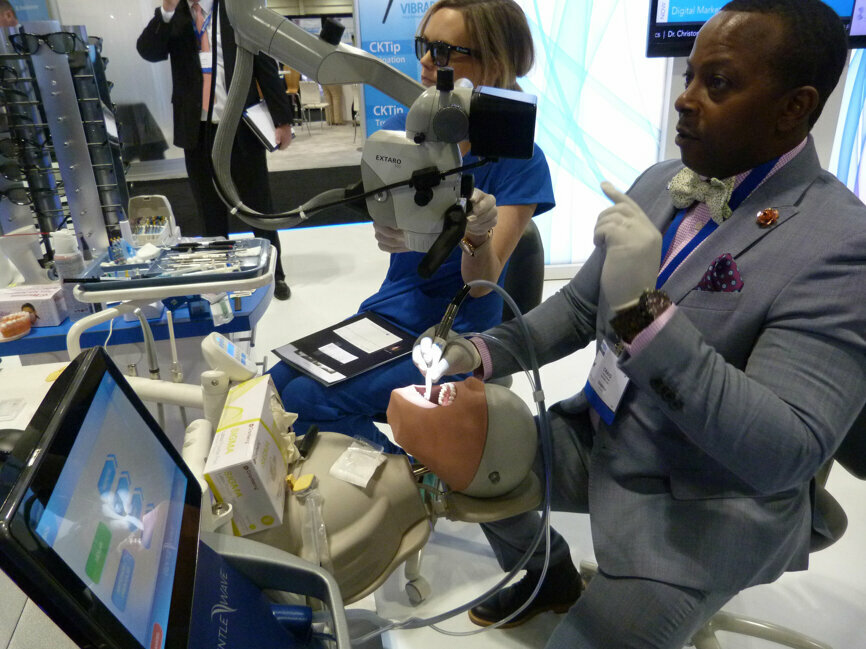 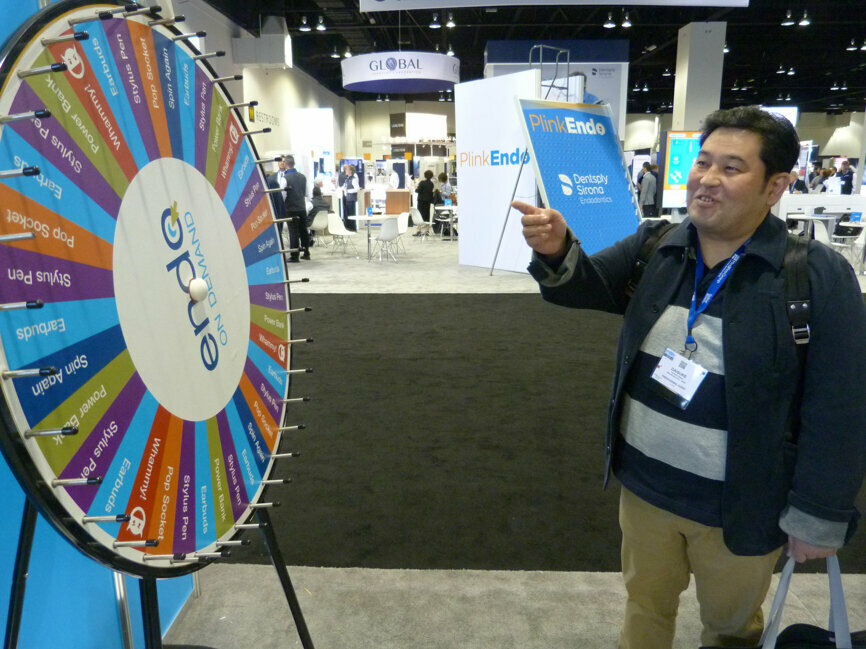 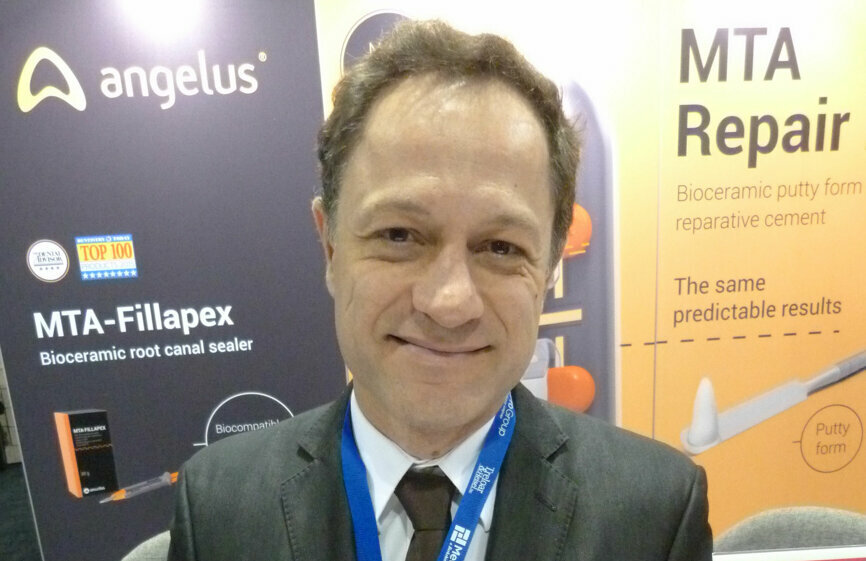 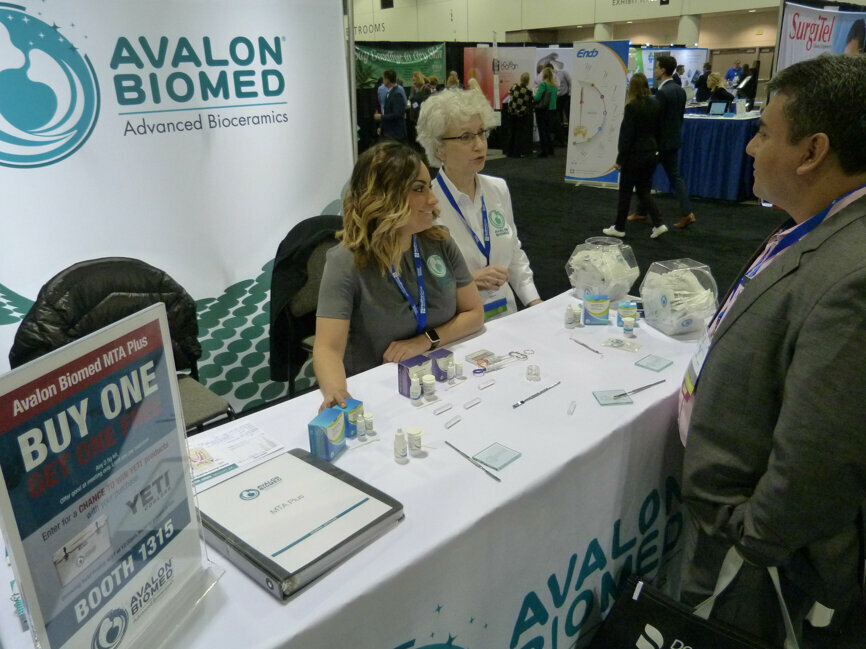 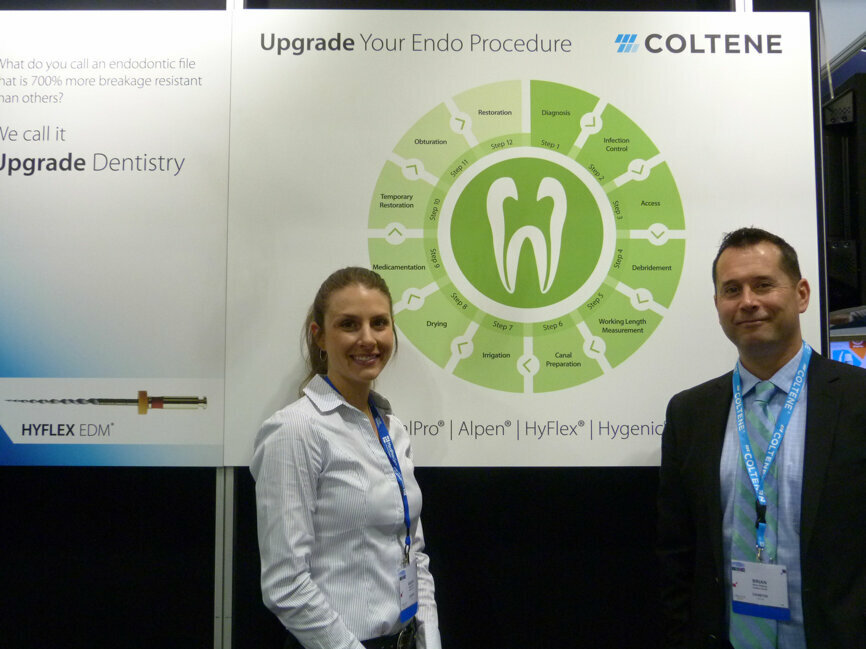 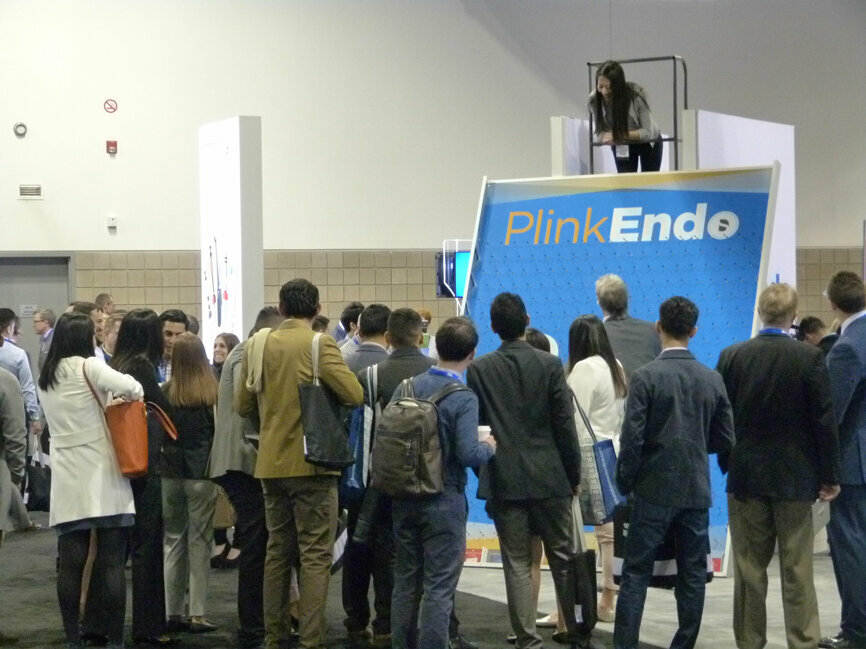 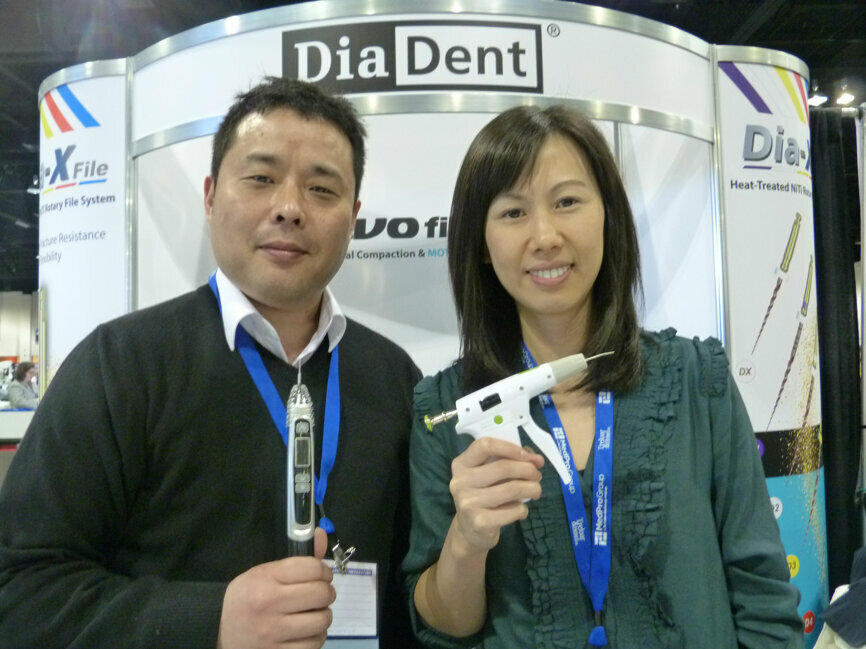 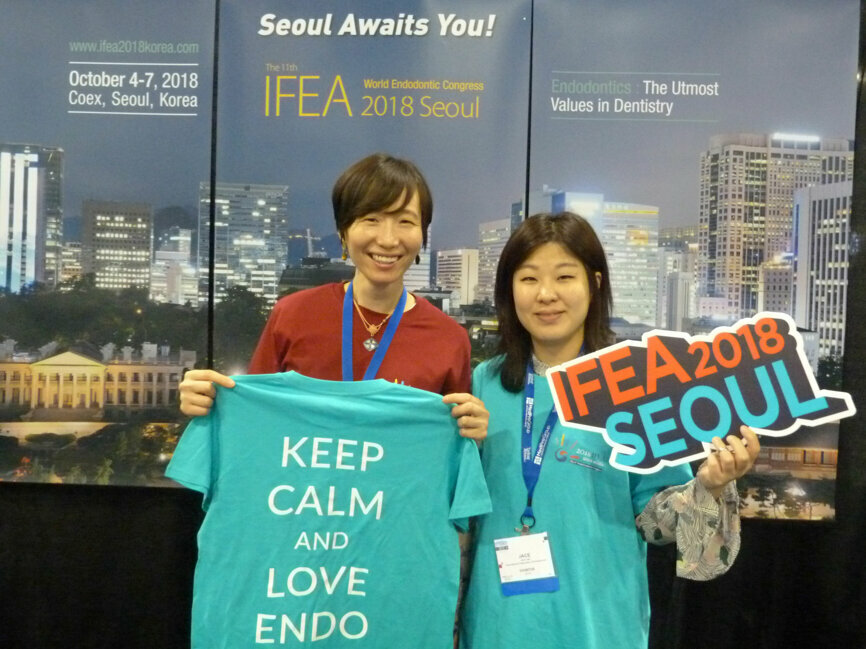 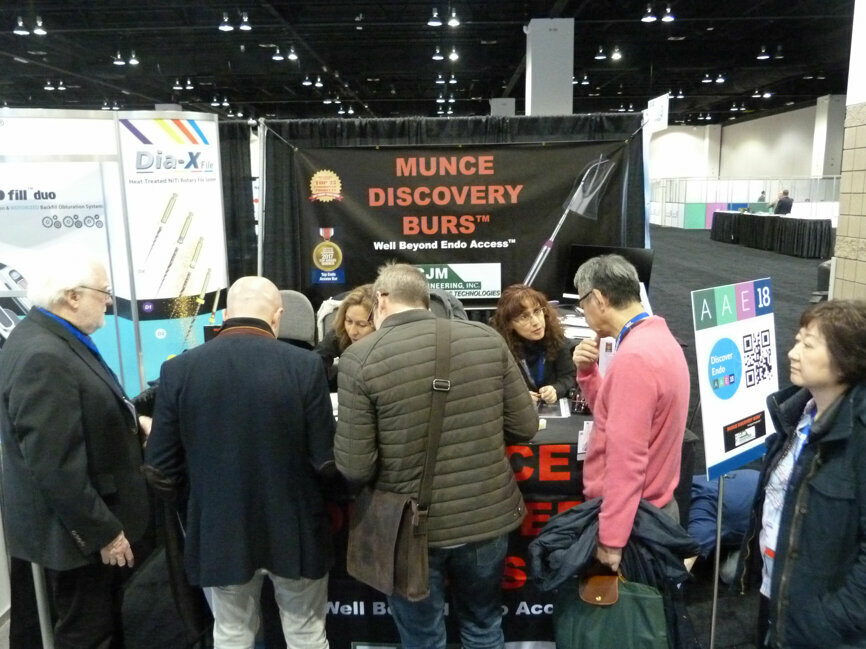 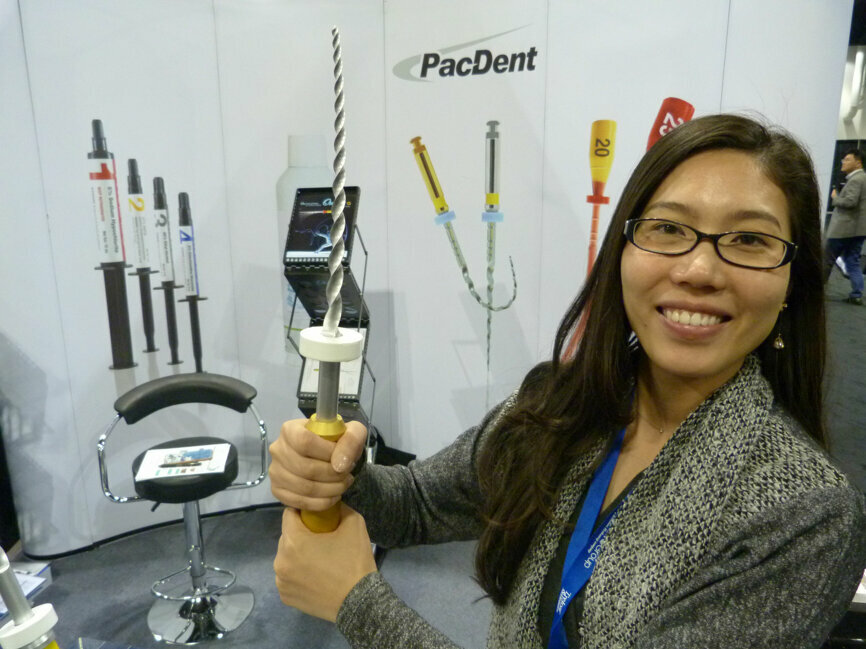 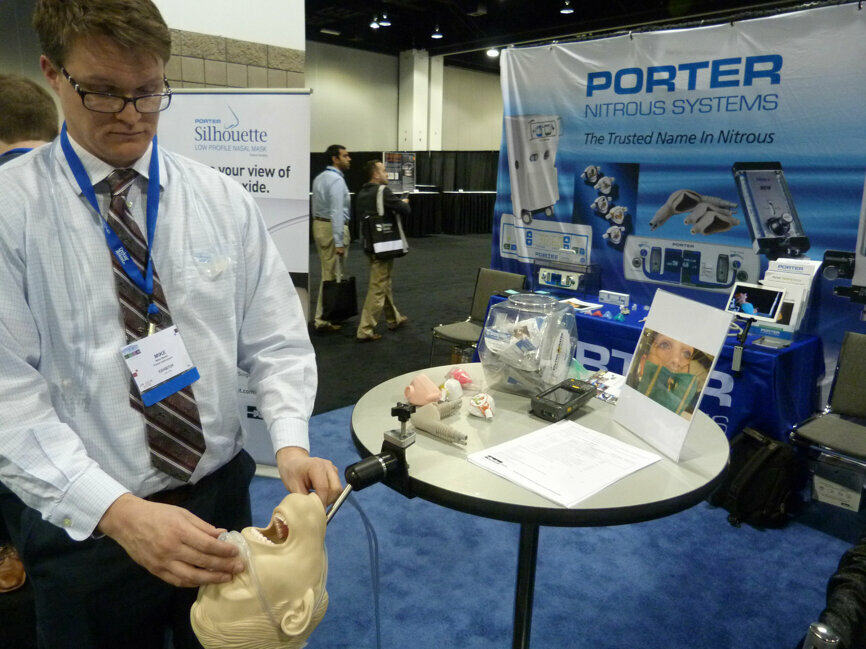 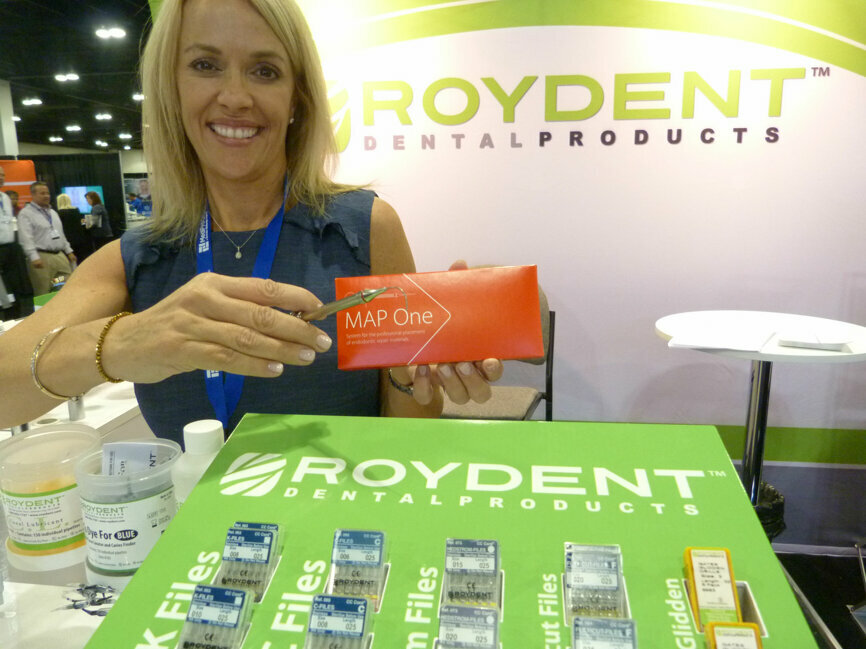 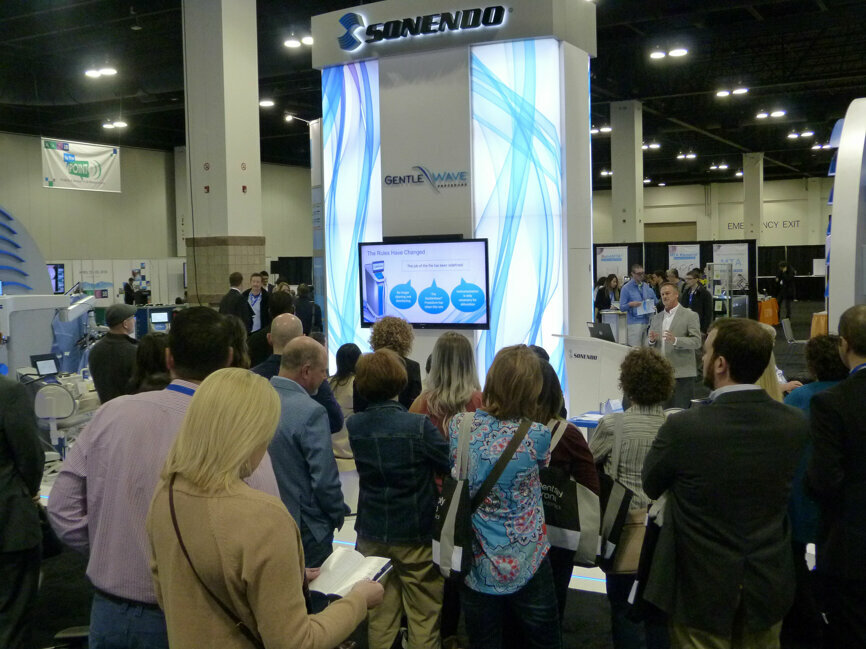 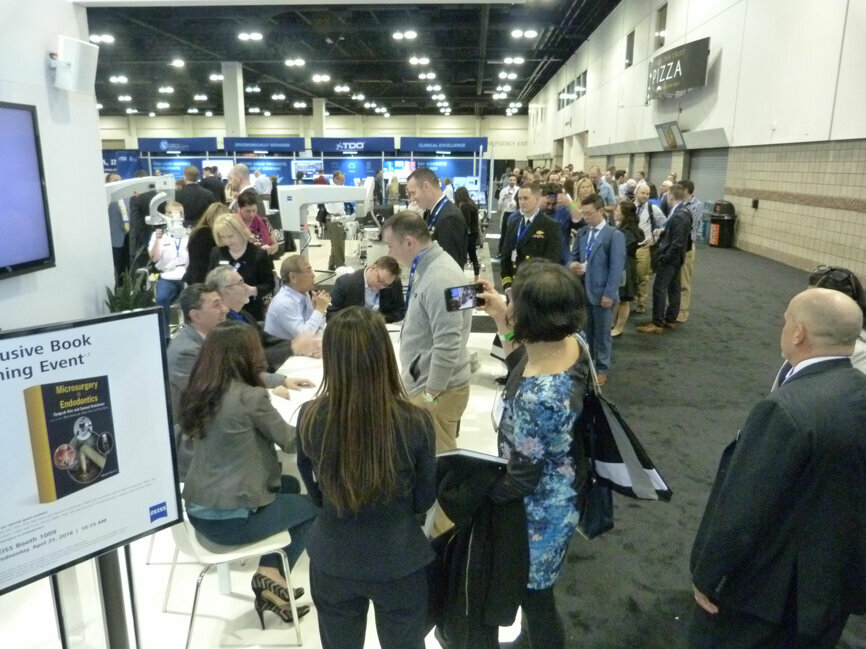 Among the greatest benefits of AAE18 were the hands-on opportunities. Whether it was working directly with some of the industry’s most advanced instruments in an all-day workshop, or simply handling an item or material while visiting a booth in the exhibit hall, the ability to hold it in your paws before you buy was a highly valued experience.

The meeting’s hands-on workshops sold out or filled up fast, but the exhibit hall booths were always ready to accommodate a visit. And the opportunities seemed endless.

In the Sonendo booth, a GentleWave System for canal cleaning and disinfection, from access opening to obturation, was set up for hands-on testing. Experienced users were available to demonstrate the procedure first, broadcasting their work onto a large-screen 3-D monitor. Formal presentations by skilled users were also held. The sessions drew standing-room-only crowds.

In the Parker Instrument booth, a mannequin wearing a Silhouette Nasal Mask was on display to demonstrate how comfortable it is for patients — and how its low profile presents the clinician with unobstructed access to the oral cavity.

In the Kohler Medizintechnik booth, you could hold the new gutta-percha removal instrument that has a peek handle. The handle’s plastic material is lightweight, easy to grip — and it reduces glare that can be especially bothersome when performing micro-dentistry.

In the Avalon Biomed booth, you could work with the new Neo MTA Plus (one material with eight uses), billed as being fast-setting, easy to place and stain-proof — all at one-fifth the cost of other MTA products.

If you went through the various stations in the Dentsply Sirona Endo booth, you could collect up to four plink chips to use on the booth’s giant “PlinkEndo” board. Everybody won something, but among the big prizes was a Mavic Air Camera Drone.

You could find another “everybody-wins” game in the AAE Attendee Lounge. You could spin a prize-wheel to win items such as earbuds, stylus pen or a pop socket. Then you could be sure to have your badge scanned for a chance to win an iPad.

The AAE18 General Session featured Aron Ralston, who recounted his harrowing experience of becoming trapped between two boulders in a remote location in Utah. His story, an inspiration to many, became a New York Times best-selling book, “Between a Rock and a Hard Place,” which inspired the major motion picture “127 Hours,” starring James Franco.

Other special events at AAE18 included the President’s Breakfast; the Louis I. Grossman Ceremony, recognizing the newest diplomates of the American Board of Endodontics; and the Edgar D. Coolidge Brunch, honoring the AAE’s award winners. Attendees could also partake in a “Celebrate! Denver” event at Wings Over the Rockies — Colorado’s Official Air and Space Museum, set in the middle of an immense hanger among a B-52 bomber, a RF reconnaissance plane and other aircraft.

If you missed all on opportunities in Denver, you’ll need to wait for AAE19 in Montreal, Quebec, Canada, for your next chance at the industry’s biggest endodontic exhibit.

DENVER, Colo., USA: Education at AAE18, the annual session of the American Association of Endodontists, isn’t confined to the classrooms: It’s found ...

NEW ORLEANS, La., USA: The 2017 annual session of the American Association of Endodontists — AAE17 — offered the perfect opportunity for ...

News Sun. 16 April 2017
Interview: ‘This is about humanity and our role as health care providers’

Dr. Anne Koch, who is presenting two lectures at AAE17, received her DMD and Certificate in Endodontics from the University of Pennsylvania. She is founder ...

Whole Body Health – what do we know and where are we going?

Ecosite Elements – The beauty of simplicity

It’s not too late to register for AAOMS / ADA holds first-ever Dental Olympics at SmileCon / The future of digital dentures is at exocad Insights 2022 / Young people need to brush interdentally, too / Implant Tribune U.S. Edition