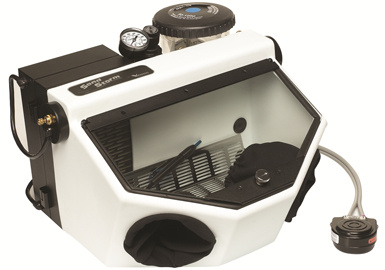 Featuring the new easy-fill media tank, the SandStorm Professional (VMC-X25) micro abrasive blaster from Vaniman was designed for light-duty touchup in the dental office. This small, self-contained single tank system holds up to 4 pounds of blasting media and has a built in dust collector. It has a large, fluorescent illuminated panoramic viewing area, foot pedal control, an adjustable air pressure gauge with condensate trap, and a non-clogging media flow design. The SandStorm Professional is virtually maintenance-free, requiring only periodic filter cleaning and the occasional replacement of its blasting tip.
More information is available from Vaniman Manufacturing Co.

Subcutaneous emphysema after a direct sinus lift: A case report

Subcutaneous oral emphysema is defined as penetration of pressurized air into the tissue spaces. One possible means of air entry is through the bone window made during a direct sinus lift. There are only 3 cases published in the literature of subcutaneous emphysema with this etiology. It is important that the dentist carefully instruct the patient about the post-surgical protocol that must be carried out to reduce the risk of this complication. A 52-year-old patient underwent a maxillary direct sinus lift for the future placement of implants in the posterior area. A few hours after the surgery, the patient repeatedly sneezed with his mouth closed 3 times, immediately causing a large swelling in the left periorbital area that prevented him from opening the eye. After clinical and radiographic examination, it was determined that it was a subcutaneous emphysema. The prescribed treatment was antibiotics. Subcutaneous emphysema is a benign and usually self-limited entity, which usually resolves spontaneously. Most authors agree on the use of turbines as the most frequent etiology. Other reasons, however, have also been reported in the literature, such as endodontic treatment and the use of dental lasers. The main clinical manifestations that aided us in establishing a correct differential diagnosis were swelling without redness, edema and crepitating palpation of the soft tissue. In general, patients do not report pain, but at worst a slight discomfort due to swelling. Keywords Subcutaneous emphysema; periorbital edema; orbital emphysema; complications; sinus floor elevation.