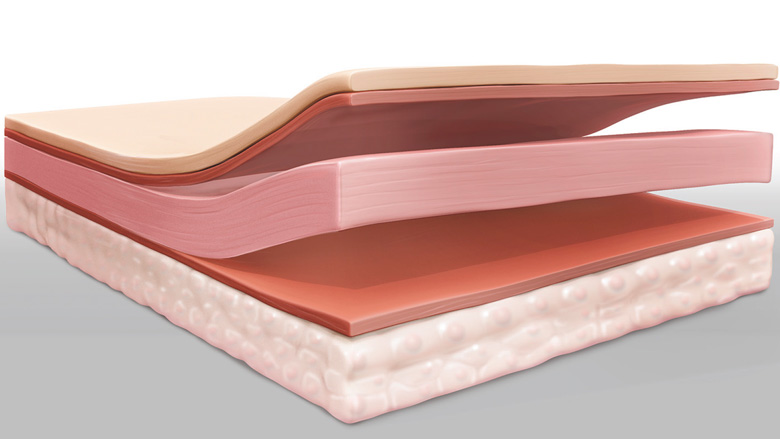 The amnion membrane by itself is thin and contains only a small portion of the biological factors found in the full‐thickness placental membrane, according to a press release issued by Salvin Dental. The chorionic membrane contains many of the same growth factors as the amnion membrane. However, the trophoblast layer holds a majority of the proteins and growth factors in the full‐thickness placental membrane.[1]

AmnioExcite is approximately four times thicker than an amnion or chorion membrane for a more substantial protective barrier.[2] AmnioExcite’s unique thickness may help prevent bacterial ingress and thus inflammation associated with infection, according to Salvin Dental.

AmnioExcite does not fold in upon itself when rehydrated, making it much easier to handle and less likely to migrate away from the surgical site during the healing process.[3]

Unlike other amnion/chorion membrane allografts, the layers in AmnioExcite are never separated during the entire process because separation can adversely impact retention of the native growth factors.[4] In most placental‐based allografts, the trophoblast layer is removed. However, by removing this layer, a rich source of beneficial endogenous biological factors and the thick structural matrix are also removed.[1] Therefore, AmnioExcite retains more endogenous growth factors than similar placenta‐derived allografts by being processed as an intact, whole placental membrane, according to the company.

A few tissue processors do retain the trophoblast layer without removing viable and non‐viable cells, which may provoke an immune response due to the presence of antigens on the cell surface.[5] The ideal solution is to leave the thick, nutrient-rich extracellular matrix of the trophoblast layer intact but remove the donor cells to minimize an immune or inflammatory response. LifeNet Health has solved this problem by processing AmnioExcite with its Matracell decellularization process.[6,7] Matracell is a patented and validated process that renders allograft tissue acellular, without compromising the biomechanical or desired biochemical properties of the allograft bio‐implant for its intended surgical application.[8]

Both Salvin Dental and LifeNet Health have an exemplary safety record, according to the press release. Since 1995, LifeNet Health has processed more than seven million bio-implants with its Allowash technology, without a single case of disease transmission. AmnioExcite has a Sterility Assurance Level (SAL) of 10‐6, which is the recommended SAL for medical devices or allografts that are implanted or come in contact with breeched skin, the press release said.

Those who wish to learn more about AmnioExcite or to place orders may call Salvin Dental at (800) 535-6566.

Academy of Osseointegration cancels its 2020 Annual Meeting in Seattle

With the health of attendees and exhibitors in mind, and to help prevent possible spread of the Coronavirus, organizers of the Academy of Osseointegration’s 2020 Annual Meeting, scheduled for this month in Seattle, have canceled the event.