quip introduces a ‘grown-up brush’ that is ‘designed for kids’

According to quip — a company that has sold over 1 million of its award-winning, American Dental Association-accepted electric toothbrushes through its direct-to-consumer website since its launch in late 2015 — kids find pride in using products that look and feel like those the adults in their life use.

So the company has made a “grown-up toothbrush designed for kids,” to help children enjoy brushing their teeth, better and more often.

According to the company, quip for kids has all of the same guiding features of the original quip (but none of the childish gimmicks of other kids’ brushes), thoughtfully tweaked for smaller mouths and hands, and to help guide healthy habits that last beyond their baby teeth.

“We spent a year working with kids and pediatric dentists to work out what would make up the ideal kids brush,” said Simon Enever, CEO of quip, in an announcement released by the company on March 5. “The dentists’ most common request was to create a brush that replicated the fundamental habit and attitude-changing effect our adult brushes have had: encouraging and guiding an effective, two-minute, twice-daily brushing routine.”

“The most impactful finding during research was that kids would beam with pride when they were given a ‘grown-up’ electric brush, and parents were relieved to see this lasting excitement, rather than the short lived buzz a typical flashy kids brush usually had,” Enever said. “The act of brushing went from something kids would avoid at all costs to a routine they consistently looked forward to, which was a dentist’s and parent’s dream. After a few tweaks to help improve grip for smaller hands, and a brush head perfect for smaller teeth, the same simple, signature quip silhouette and sensitive, timed sonic vibrations were the key to inspiring kids’ positive attitudes and adherence to their oral care routine.”

“There’s a common misconception that oral health is less important for children because primary teeth eventually fall out,” added Dr. Jeremy Krell, DMD, director of dental at quip. “Brushing with good technique from an early age is important to help reduce plaque, prevent cavities and maintain healthy gums. Baby teeth play many critical roles in development: they help to save space for the adult teeth, support proper craniofacial bone growth, and aid in eating and speech development.”

“Childhood habits also prepare you to live as a healthy adult,” Krell said.

Features of the new children’s toothbrush from quip include sensitive sonic vibrations; a single mode, timed for two minutes with guiding pulses every 30 seconds; soft bristles made safe for gums (and safe for braces); a smaller head to clean smaller teeth; sensitive vibrations safe on gums and with less mess and splatter; a lightweight, soft plastic handle; an easy-to-hold, comfortable, non-slip grip for smaller hands; and more. 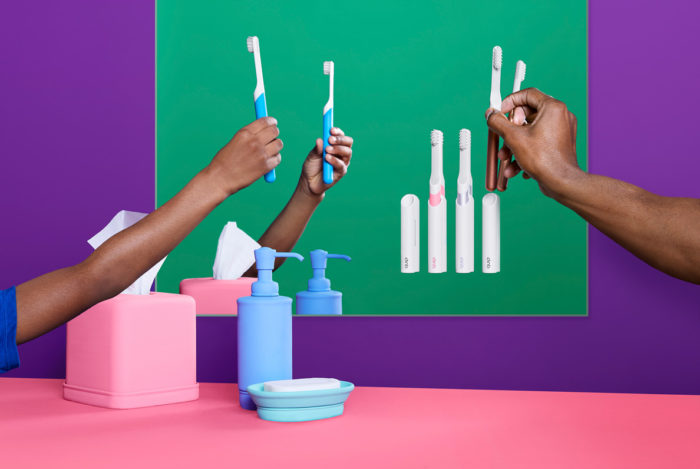 quip introduces a ‘grown-up brush’ that is ‘designed for kids.’ (photo: quip)

According to the company, the toothbrush is also waterproof and shower-safe; has a slim design that is designed to last for life; is available in four colors (pink, green, purple and blue); has a multi-use cover; has a mirror mount, for no counter clutter; has a slim stand that stores within reach; and it covers the bristles to protect when traveling. The toothbrush features no gimmicks like lights or music.

The toothbrush lasts three months on a battery charge, and a fresh head is delivered every three months. A free battery is included with each head refill, and it is rechargeable battery compatible. There are no wires or bulky chargers.

According to quip, thus is the first ADA-accepted kids electric toothbrush with a refill plan.

More information about the company is available at www.getquip.com.

CHICAGO, U.S,: The Chicago Dental Society held its 2019 Midwinter Meeting from Feb. 21 to 23 at McCormick Place West. The event featured more than 600 exhibiting companies and numerous …

BOSTON, Mass., USA: The 2019 edition of the Yankee Dental Congress was held Jan. 31 to Feb. 2 at the Boston Convention & Exhibition Center. Hundreds of courses were offered, …

Antibiotics not necessary for most toothaches, according to ADA

CHICAGO, Ill., USA: The American Dental Association (ADA) recently announced a new guideline indicating that in most cases, antibiotics are not recommended for toothaches. This guidance, published in the November 2019 issue of the Journal of the American Dental Association, aligns with the ADA’s longstanding antibiotic stewardship efforts and its pledged commitment to the U.S. government’s Antimicrobial Resistance Challenge.

MELVILLE, N.Y., USA: Stanley M. Bergman, chairman of the board and chief executive officer of Henry Schein Inc., received the National Network for Oral Health Access President’s Award for his support of NNOHA as well as his personal, professional and humanitarian accomplishments.

Osstell Beacon is now available in the United States

Osstell, developer of the proprietary diagnostic technology Osstell ISQ (Implant Stability Quotient), has announced that the Osstell Beacon is now available in the United States after receiving clearance from the FDA. The Osstell Beacon is described as a new, innovative and highly intuitive tool designed to assess dental implant stability.

CHICAGO, Ill., USA: Have you ever heard the phrase “worse than a root canal?” Chances are you have, but thanks likely to modern advancements in technology and the advanced training of root canal specialists, it turns out that cliché analogy may not ring as true as you think.