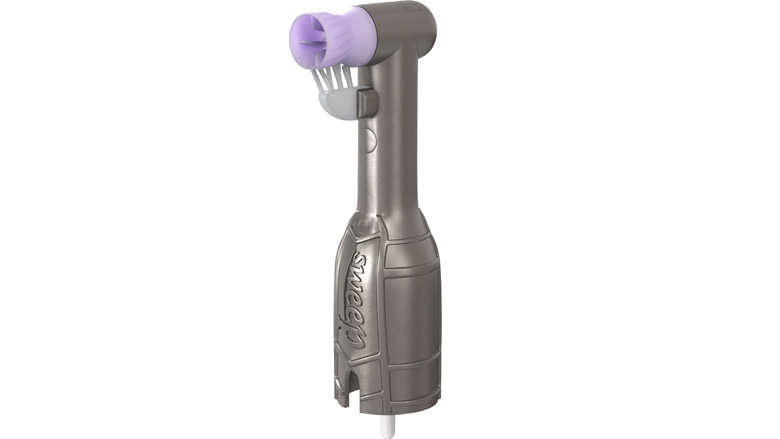 Splatter is a near-constant concern for dental hygienists during polishing, with 80 percent reporting at least a moderate amount while using their current prophy angle. After switching to the Ultrapro Tx Sweep DPA, five out of six hygienists experienced a significant reduction in splatter, according to Ultradent. Ninety-five percent said they encountered little to no splatter compared to their former angle, the company said.

Ultrapro Tx Sweep DPA’s performance upgrades come from the unique brush guard attached near the head of the angle, effectively “sweeping” away saliva and prophy paste as it accumulates. This method significantly reduces splatter by 95 percent (data on file). The flexible bristles of the brush guard prevent splatter before it gathers by efficiently stopping saliva and paste from collecting and roping around the outside of the cup, the company said.

In order to reduce prophy paste waste and keep the treatment field clean, the Ultrapro Tx Sweep DPA sweeps excess saliva and paste back toward the tooth. This allows the hygienist to continue working, with no need to refill the cup with additional paste.

According to the company, the benefits of Ultradent’s popular Ultrapro Tx Skini DPA have been seamlessly incorporated into the Ultrapro Tx Sweep DPA. Features include advanced internal blade design, outer ridges for better interproximal cleaning, optimal flare, and quiet gear design. Its ergonomic shape features both a 20 percent shorter head for better access and a 25 percent slimmer neck for improved visibility, the company said.

Building on Ultradent’s tradition of innovation, the Ultrapro Tx Sweep DPA sets a new standard in polishing, ensuring both hygienists and patients have the clean and comfortable experience they deserve, the company said.

More information and ordering is available by calling (800) 552-5512 or by visiting ultradent.com.