Back to clinical articles USA
By Angelica Chaghouri, Herman Ostrow School of D
May 03, 2019

Patient-centric care has been pervasive across health systems in the United States during the last several years (Epstein, Lesser and Levinson, 2010). The same approach of putting patients first in dentofacial treatment is no exception. Individualized care is no easy feat and requires a combination of factors: understanding patients’ goals and expectations, treatment planning, utilizing up-to-date instruments and tools and an open and positive relationship between health-care providers (i.e., orthodontists) and patients.

Researchers and practitioners alike have poured hours into implementing the best treatments and tools to achieve patient success, and less attention has been paid to how orthodontists’ relationships affects patients’ satisfaction with their outcomes.

The study sought to understand how doctor-patient relationships influence patient satisfaction with their orthodontic treatment by soliciting survey questionnaire responses from patients in three different clinic environments. A majority of patients who were satisfied with treatment and the overall experience also had very positive relationships with their orthodontists.

Are orthodontia patients satisfied with their outcomes upon the completion of treatment? The days of the all-knowing doctor are over, and as health-care providers, we cannot be satisfied solely if a patient received and completed a treatment (Anwar, 2017). Doctors need to give attention to the wholeness of a patient’s experience throughout treatment, which is commonly referred to as patient-centric care.

Before patient-centric care was a priority, doctors solely dictated treatment plans, but that has changed in recent years. Today, doctor-patient relationships are a large part of the patient’s overall experience. It is no longer satisfactory to simply address a patient’s chief complaint. Patient satisfaction with treatment outcome is a function of the care received.

The literature demonstrated that factors impacting patient satisfaction varied. Pacheco-Pereira, Pereira, Dick, Perez and Mir (2015) found that patient satisfaction was associated with at least three different factors: perceived esthetic outcomes, psychological outcomes and quality of care. According to Bos, Hoogstraten and Prahl-Andersen (2003), a patient’s attitude toward his/her appearance before orthodontic treatment would affect the perception of treatment after completion. If a patient has pre-treatment goals, how hopeful can the orthodontist be regarding improving perceptions by providing care? Pacheco-Pereira et al. suggested that “quality of care” could be one of the answers.

Pacheco-Pereira et al. (2015) defined “quality of care” in terms of dentist-staff-patient interactions during the course of treatment. Sinha, Nanda and McNeil (1996) concluded that orthodontist-patient relationships had a significant effect on satisfaction, compliance and adherence during treatment. Sinha et al. (1996) surveyed more than 200 adults before and after completing orthodontic treatment that provided evidence linking doctor-patient relationships and satisfaction. They suggested that an orthodontist’s behavior was correlated to patient satisfaction. They identified behaviors such as politeness, friendliness, empathy and communicativeness as influential in affecting satisfaction — the most important were politeness, reassurance and concern. Their research revealed that the doctor's calm, confident attitude and unhurried approach increased patient satisfaction (Sinha et al., 1996). Sinha et al. emphasized that patient compliance was definitely related to treatment satisfaction. Nanda and Kierl (1992) found that patient-doctor relationships have a significant effect on patient compliance and treatment outcome.

There was conflicting research on the topic of compliance. In 2003, Bos et al. found that individuals who were generally satisfied with their smile had different expectations than those whose self-perception of their teeth was bad. In 2005, Bos et al. found that there was not a strong correlation between compliance and satisfaction but that sex was a better predictor of satisfaction than compliance. This suggested that a function of patient satisfaction with treatment outcome might be based on pre-treatment appearance, which an orthodontist would have no control over.

Given the social/psychological nature of this research question, a qualitative methodology was chosen because it is best suited to explore dynamic human behaviors rather than a quantitative method (Seidman, 2006). This research study pursued an empirical phenomenological methodology since it “…involves a return to experience in order to obtain comprehensive descriptions that provide the basis for a reflective structural analysis that portrays the essence of the experience” (Moustakas, 1994, p. 13). The variables associated with understanding patient-doctor relationships were not easily quantifiable and required understanding a patient’s experiences with his/her orthodontists since feelings are not discrete, numeric or constant; they evolve over the course of a relationship and may manifest differently at various times. The best way to understand a patient’s experience was to allow them to express themselves through a survey as the instrument of choice.

Three different populations were surveyed. The first two participant groups were randomly selected from two orthodontic clinics and the third population was a self-selected peer group. Surveys were printed and distributed in March 2018 and collected in October 2018. The two clinics included a private practice in Irvine, California (Group 1-A) and the Herman Ostrow School of Dentistry at USC Advanced Orthodontic Clinic (Group 1-B). The final group was chosen from current Herman Ostrow School of Dentistry students (Group 2-A) who had completed orthodontic treatment in the past. In soliciting participants for the study, the attending orthodontist and this researcher attained permission from patients before administering the survey. Study participants from the two clinics (i.e., Group 1-A and Group 1-B) received the survey from their orthodontists and were asked to return the completed survey to the front desk staff. Since survey participants from Group 2-A were current Herman Ostrow School of Dentistry students, they were asked to complete the survey directly by this researcher. The survey was administered to 27 adults, 19 females and 8 males. Requirements for participant selection were individuals who (a) completed full treatment fixed maxillary and mandibular orthodontic brackets for at least 12 months, (b) were over the age of 18, and (c) resided in the greater Los Angeles area.

The survey instrument was designed with questions identifying age, gender and race in the first section. It was important to include and emphasize age and gender because dentofacial appearance has a negative correlation with age (i.e., as an individual ages, their dental appearance satisfaction decreases); this correlation was especially true among women (Al-Omiri and Abu Alhaija, 2006). According to Al-Omiri and Abu Alhaija, personal identifiers were important because gender identity and age affect/effect initial perceptions of appearance.

In the second section of the survey, a list of 14 questions were asked and measured on a Likert scale (i.e., 1 to 5) (Likert, 1932). The Likert scale was used because it is a common form of measurement for an individual’s attitudes on a given topic. Participants were asked to rank how much they agreed with a question or how satisfied they were with a scenario on a scale of 1 to 5 — one represented very dissatisfied or very disagreeable response and five represented very satisfied or very agreeable. The data were collected, recorded and analyzed in an excel spreadsheet in October 2018. The survey data results are available in Figure 1.

The following instructions were presented at the top of the survey.

Please complete the two sections below. The first section is strictly biographical. The second section asks you to reflect on your orthodontic treatment. Please respond to all 14 questions to the best of your ability. All of the questions in this section are based on a 1 through 5 (e.g., 1=Very Dissatisfied to 5=Very Satisfied). Please note that your responses will remain anonymous and none of this information will be shared beyond the scope of this research.

There were two noticeable challenges during the data collection phase. First, the patients who satisfied the participant criteria was limited. Also, patients returning to their orthodontists’ offices after the completing treatment infrequently, slowing down data collection. Second, patients who had braces in the past may not remember the nature of the relationship with their orthodontist. This was especially true for current Herman Ostrow School of Dentistry students—many of whom had full appliance therapy more than 10 years prior to this research study.

Asking orthodontists to allocate extra time to recruit survey participants was an additional burden on patients. This may have affected survey results from both the private practice and USC’s Advanced Orthodontics Clinic. This researcher was not present in the private practice nor in the USC clinic when the surveys were distributed. If the surveys were distributed by someone unassociated with their treatment, participants may have felt less pressure to input favorable responses and might have been more critical about their relationship with the orthodontist.

The survey questionnaire offered respondents the opportunity to rate questions on a 1 through 5 scale. In the data analysis phase, responses were grouped into three categories—satisfied (#4 & #5); neutral (#3); and dissatisfied (#1 & #2) to order, analyze and interpret data from the 27 respondents.

There was also variability to the question 7: “Did you feel like your orthodontist spent enough time with you during each visit over the course of your treatment?” Data suggested the amount of time a doctor spends with his/her patient may vary and spending more time with a patient may not mean the patient will have a better (or worse) doctor-patient relationship. The data also suggested that the quality of the interactions may be more important. 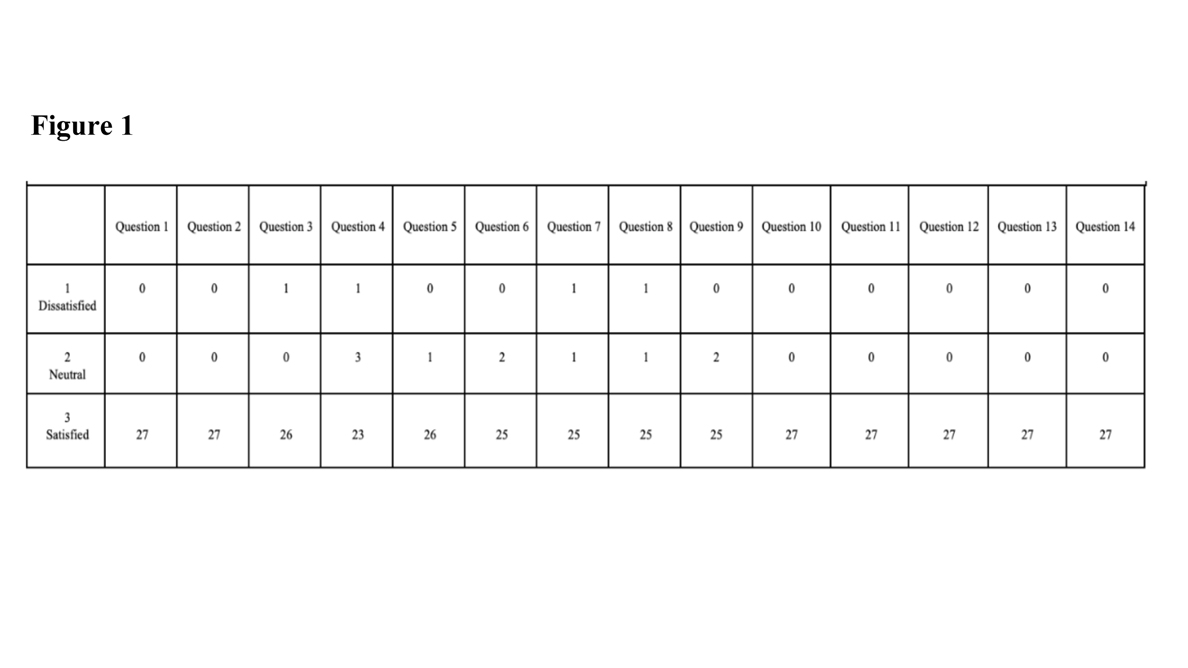 This research sought to explore a pathway for improving patients’ orthodontic outcomes. The literature pointed out that quality of care was an important factor in achieving high quality outcomes. One facet of addressing ‘quality of care’ was patient-doctor relationships and this study examined whether such relationships impacted patient satisfaction. Through a qualitative research methodology, implementing the use of surveys, data were gathered on patient-doctor relationships among three sample populations. The conclusions drawn from the data suggested that patient-orthodontist relationships do matter for patient satisfaction and orthodontists who pay attention to the relationship with each patient can often achieve a higher quality of care.