Back to clinical articles USA

One of the dental field’s biggest esthetic priorities, after restoring and preserving health, is enhancing the smile. In 1995, Dentistry Today published an article I wrote about a technique I developed, which I called “Growing Enamel.” The phrase is erroneous, of course, because, after enamel is formed, it does not grow. But this technique creates an image of it doing so. In the years since the article was published, the concept has been copied in articles and books on cosmetic treatment techniques without reference or recognition. However, imitation or replication is a great form of flattery.

When I wrote the article “Growing Enamel,” it was during the early days of a groundswell of esthetic awareness of the mouth, which resulted in the adoption of various oral esthetic techniques and treatments. As a periodontist, I concentrate on the background of a smile to enhance the desired foreground — the appearance of a glowing smile.

Even, symmetrical and appealing

The maxillary anterior teeth are the most visual and the crux of the smile. First impressions are formed here. What we want to see is bright, white, symmetrical teeth; but most teeth fall somewhat short of this desired illusion. When viewed closely, the natural incisal edges are obviously not even. The lateral incisors’ edges are usually slightly shorter than the central incisors’ edges. The cuspids’ shapes are not entirely level to the incisors and typically of a different shape altogether. The technique “Growing Enamel” helps create the image of an even, symmetrical and appealing smile.

There are many causes of an imperfect smile. Perhaps there was an accident that resulted in the breaking of an incisal tooth. Perhaps an anterior tooth changed color. Perhaps incorrect shading was used with an anterior restoration. Virtually anything that changes the desired illusion of a clean, bright, symmetrical flow, might be the culprit. We need to remember that the actual average natural size of the central incisor is 11.5 mm gingival-to-incisal height with an average 9 mm mesial-distal distance.

The “Growing Enamel” technique is the manipulation of the periodontia when the tissue is such that it distorts the visual appearance of the visible teeth. There must be no loss of supporting alveolar bone, and there must be a healthy zone of keratinized gingiva.

Of vital importance is the preservation of the interproximal tissue. The keratinized interproximal tissue may be manipulated vertically, but the interproximal tissue must be preserved. There is no new blood supply interproximally, so the area, if removed, will show an undesirable dark interproximal space referred to as a “black diamond.” The resulting final image should end with a healthy zone of attached keratinized, pinkish-white gingiva forming a background to the desired size and shape of the anterior teeth. Using a form of the apically repositioned flap, with healthy tissue as the esthetic goal, the “Growing Enamel” technique serves as a vital approach to achieving a maintainable smile desired by both the patient and the practitioner.

The technique “Growing Enamel” should be part of the esthetic surgeon’s choices of techniques. Techniques such as “crown lengthening” imply the exposure of more tooth structure by removing surrounding tissue and bone. “Growing Enamel” relates to the exposure of only the anatomical crown, which too often is covered by hyperplastic or excessive gingiva, preventing natural esthetic properties from being emphasized.

Terms such as “gingivectomy” or popular words such as “sculpting” are just references to removing hyperplastic tissue. There is no definitive desired goal except removing excess tissue, and there is inconsistency when there is no uniform and desired goal. Sometimes the removal of tissue can result in root exposure or inconsistent proportions of tissue that distort the smile.

A definitive surgical technique such as “Growing Enamel” avoids the recession possibilities and adds predictability to the desired symmetrical background.

In this example case, a 19-year-old woman wanted a beautiful smile she could be proud of (Fig. 1). Initially, she presented with bleeding gingiva, but after a series of non-surgical treatments, which included oral hygiene instruction, the bleeding ceased.

Her #7 appeared to not look clean, with a worn, stained restoration labially. It also appeared short in height. The centrals had a square appearance, not the length of a normal appearing incisor, but shorter and not streamlined. The cervical line was irregular, the cuspids being higher and the centrals irregular and lower.

Using the “Growing Enamel” technique, I locally numbed the area with lidocaine. A sharp blade incising intrasulcullar was done, followed by an elevator to reflect the flap. Before any surgery, radiographs — in conjunction with probing of all areas of the periodontia — were taken, detailed, listed and used. Repeating a major point: No interproximal tissue was removed. 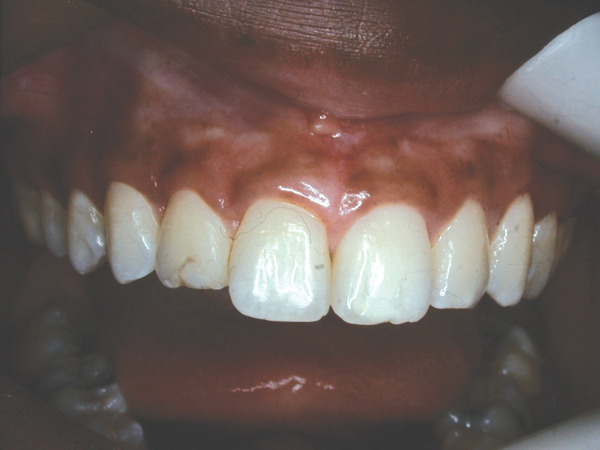 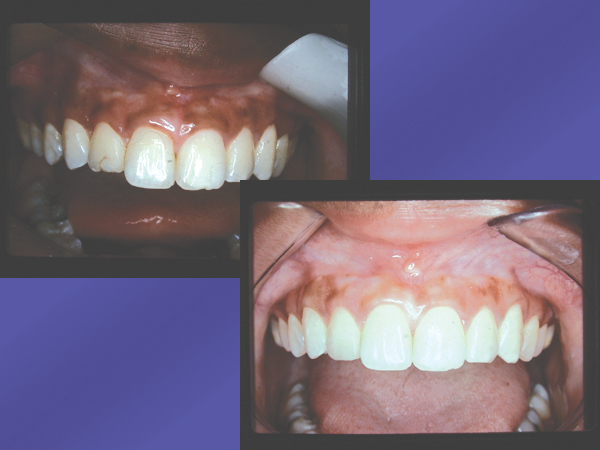 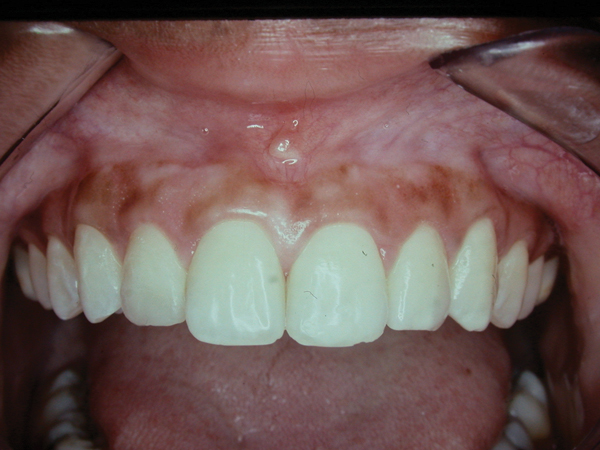 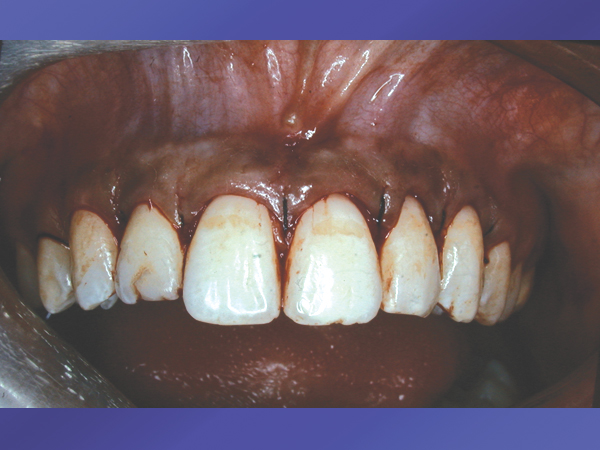 The tissue was now placed at the desired level, usually at the symmetrical cervical height. Using the cuspid cervical height, in this case, the laterals and the centrals were positioned and sutured with a sling suture technique (Fig. 2) at the desired symmetrical level. Notice that the natural length of the incisors are exposed, but not the roots. The interproximal tissue is maintained to avoid the previously mentioned black-diamond appearing spaces that result when the interproximal tissues are removed. Notice the now exposed full enamel covering of the teeth involved, giving the length of the teeth the exposure required for the goal of “that smile” (Fig. 3). After the final stage, the young woman was ecstatic about her new bright smile. Her #7 was restored with a composite restoration. She maintains her oral health enthusiastically with oral hygiene, keeping the now healthy anterior periodontia maintained. The homogeneous color of the gingiva is symmetrical in lateral and vertical dimensions. There are no dark spaces interproximal, and the cervical symmetry of the teeth aid her ability to enjoy her glowing smile. The previously square-appearing teeth, are now restored to a natural, longer-appearing crown length, with the cervical gingiva on an even, lateral-linear appearance.

This case presentation exemplifies the “Growing Enamel” technique and its ease of use when correctly diagnosed to turn an undesirable-appearing smile into a bright, glowing and symmetrical one that the patient will love and enthusiastically maintain.