The vascularity of many upper second molars is very dense in many cases regardless of the age of the patient. Through the center of this pulp chamber we see a return flow vascular body. (Photo: ©2020 Craig Barrington, DDS)

Back to clinical articles USA

Many readers will be familiar with Craig Barrington, DDS, whose photography has been featured on the cover of roots a number of times over the years. His images also appeared in Endo Tribune along with an interview (see “The immense variability of human tooth anatomy,” Endo Tribune, December 2016, Vol. 11, No. 4, Page 1). 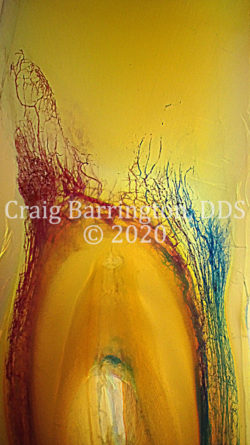 Fig. 1: The dual color stained vascular distribution with the pulp chamber of a lower first molar. In the center bottom portion of the chamber we see a very large vessel structure. It’s these large vessels lying on the chamber floor that create the well-recognized dentinal map. (Photo: ©2020 Craig Barrington, DDS)

Since that article appeared, Barrington has refined and improved his technique even further, with results that are often even more breathtaking in scope and sheer beauty. Barrington’s photographs of the interior of teeth often reveal vasculature that is more complex than has previously been revealed. Some of the images resemble other forms in nature, such as the branches of a tree, or a river and its tributaries, or even a coral formation.

In a new interview with roots conducted in October 2020 via web conference and email, Barrington shared and described some of his more recent images (Figs. 1-3), which he has protected by copyright, and he offered some insights on the complexity of this particular aspect of human anatomy.

For those who are learning of you and your work for the first time, can you please give us a brief explanation?

I use diaphanization, which is the exposing of a former living tissue to a series of chemicals and processes to make it transparent. This is how organs were viewed in 3-D prior to the computer technology we have today. The initial process was created by Werner Spaltholz in 1906. The process was introduced to dentistry via publication in the Dental Cosmos in 1913.

Your work has been featured on the cover of roots before, and you also gave an interview to Endo Tribune a few years ago that was illuminating as well. How have you refined your technique since we last spoke?

Oh wow! I crossed in to a new dimension that I never knew was possible. As you see, I have been able to repeatedly expose not only the canal systems of a human tooth but the internal structures in the form of the vascularity and the nerve all in the same specimen. I have been able to do this in a repeatable and reproducible fashion. It has occurred out of pure luck, intense repetition, astute observation and ultimately through learning from error. 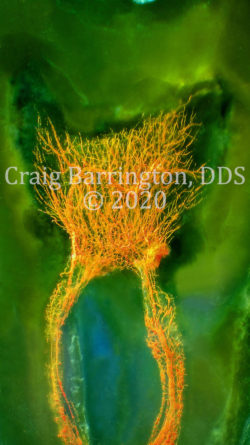 Fig. 2: The vascularity of many upper second molars is very dense in many cases regardless of the age of the patient. Through the center of this pulp chamber we see a return flow vascular body. (Photo: ©2020 Craig Barrington, DDS)

How long have you been photographing teeth in this manner?

For more than 20 years now. But the recent photographs are also of a completely new method that came about through luck, reading, repetition, observation and failure.

How long does the diaphonization process take?

This depends on the structures one would like to view vs. the initial starting point of the specimen acquired. If someone wants to view the results of a failed, extracted tooth root canal then it doesn’t really matter how the tooth was acquired or whether or how the tooth was stored. With teeth like this, a result can be achieved in 12 to 24 hours. If one would like to achieve a result where the vascularity/nerve are visible, then the collection and storage have specific parameters that need to be followed. Overall, a result can be achieved in about five to seven days from the acquisition of the specimen.

What has surprised you the most about the human anatomy since you started creating these images?

There is still so much we don’t know. We think we are in control, but we are very much not anywhere close to understanding the human body and its functions.

Has your work in this area changed your understanding of dentistry in general?

I have taken a turn in a direction that dentistry is not going. I have seen things, entities and formations that no one else has ever seen before in dentistry. I have had time to think about these observations and possibilities that could come about in our clinical options. Currently there is no research, materials or methods to approach the pattern of results in anatomy that I have seen.

In your view, how can dentists and specialists benefit from studying these images?

We should be working to aid and/or repair the tooth in healing itself vs. removal and replacement of these structures.

The vascular anatomy is quite pronounced in your images. Do you see any uses in dentistry, or in medicine in general, for how the harvested teeth might be used now or in the future, aside from photography and study?

The list is so long that it’s hard to know where to start. For one aspect, teeth are being extracted and discarded as trash when inside are blood vessels that could be harvested, grown and used in other parts of the body. This doesn’t just have to be a wisdom tooth. There is quite a bit of vascularity in every tooth and at every age group. 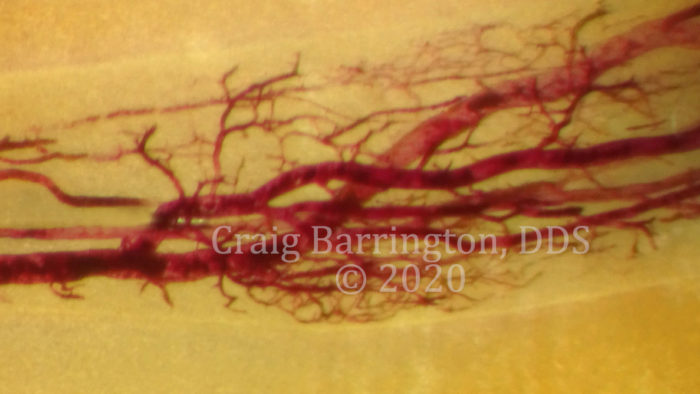 Fig. 3: The vessel distribution within the canals of teeth is a gravity defying, law of physics breaking, anti-law of conservation of matter and mysterious observation that needs much more documentation. (Photo: ©2020 Craig Barrington, DDS)

In another area, the effects of medication on the dental pulp needs to be analyzed, as I have already achieved results that expose the vascularity of the pulp and there are some unusual appearances. It is my very initial hypothesis that one of the medications patients are taking is altering the blood flow in their teeth. This could be used to the advantage of some other attribute in medicine or at least be an aid in the tooth healing itself via a medication the patient takes vs. having a root canal in a clinical setting.

This list is long, so to cover all of it here would be difficult. But how is that for starters?

Your pictures would not be out of place in an art gallery. What do you think?

Probably the first reaction I get from many people is that they immediately see artwork and want to make a picture to hang on a wall. I find that admirable, but it honestly overlooks and somewhat negates that we need to understand that these are human body parts.

It has been my wish and demand that these images not be used as art or for profit but that they be viewed from a scientific basis such that we advance humanity, dentistry and/or medicine and the benefit of all suffering from conditions and/or illness.

I think this quote, from Pope John Paul II in his encyclical Evangelium Vitae, applies: “Respect for life requires that science and technology should always be at the service of man and his integral development. Society as a whole must respect, defend and promote the dignity of every human person, at every moment and in every condition of that person’s life.”

Do you have plans to publish these photographs?

I have a book in the process of being published with Quintessence. We have a few more months before that gets completed, but then I hope to start on a second, follow-up edition.

Do you have anything you would like to add?

I would like a full-time job researching internal anatomy of human teeth. We need more results and observations in the realm of patterns and associations with various systemic conditions and medications.

Currently all the results achieved have been as a result of my efforts working mornings, evenings and weekends around a full-time active dental practice. Even if I could work two to three days in a row undisturbed and with help, the results could be increased tenfold from what I’ve been able to achieve on my own, on the time I have available.

There is no doubt that this work could benefit humanity on many aspects and horizons.